Was God married? Part two: the death of the goddess 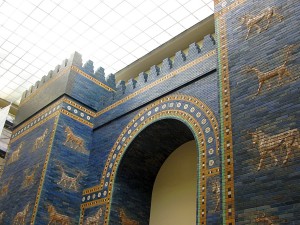 The massive gate honouring the goddess Ishtar was an impressive featuree of ancient Babylon, it has been rebuilt in Berlin's Pewrgamon Museum (Photo Tim Bulkeley)

Francesca Stavrakopoulou closed her article “Why the BBC’s new face of religion believes God had a WIFE” saying:

I can’t help but wonder what the world would be like had the goddess remained.

Let’s explore the evidence and try to answer her speculation. This evidence comes mainly from surrounding peoples, though the Bible has some contribution to make, so this podcast can squeak into a series called 5 Minute Bible 😉

Most of ancient Israel’s neighbours had pantheons which included prominent goddesses alongside gods. In Egypt Isis was particularly important, while in Mesopotamia the gate named after Ishtar was a hugely impressive archaeological feature. In Ugarit, Anat the sister and wife of Ba’al had an important role to play in restoring the king of the gods to life.

Could Israel have benefitted from a female companion for Yahweh?

Tags: gender of god, God is not male, goddess, Yahweh

3 Responses to Was God married? Part two: the death of the goddess