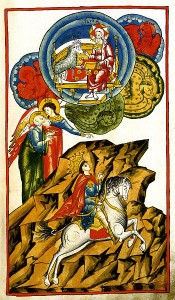 If you’ve been wonderoing when all the visions in Revelation begin, wonder no more. Today’s reading is full of visions.

A throne in heaven: for God alone rules heaven and earth. One sitting on it: God is not named, for that would be too familiar in this dangerous vision, dangerous because humans are unholy and God is holy. Then v.3 is a reminder not to take this vision as visual, it’s a word picture

Many of us approach John’s visions wanting to know more than John tells us, either about what heaven is like or about God’s timetable for the future. So people dig into the visions, work cleverly at their imagined codes… Spurgeon in a sermon on this passage puts it well: ((C.H. Spurgeon, Metropolitan Tabernacle Pulpit, Vol 15, No.887))

It is very little that we can know of the future state, but we may be quite sure that we know as much as is good for us. We ought to be as content with that which is not revealed as with that which is. If God wills us not to know, we ought to be satisfied not to know. Depend on it, he has told us all about heaven that is necessary to bring us there; and if he had revealed more, it would have served rather for the gratification of our curiosity than for the increase of our grace.

So sit back, relax, and enjoy the words, catch a glimpse of the glory and holiness of God! But, be content with this glimpse “through a glass darkly” because this side of death it is all you will get, or need. And one day, quite soon enough we’ll be there face to face! It’s better to spend time getting spruced up and ready, rather than speculating on what the view will be like!

This vision is full of echoes of Scripture. The most obvious in ch.3 is the “Trishaggion” (the triple declaration of God’s holiness) that recalls the temple vision in ch.6 of Isaiah. But the creatures with their eyes echoes Ezekiel’s opening vision (as does the scroll at the start of ch.5).

There are loads of intertextual echoes throughout this material. So, why not get a good set of cross references (the ones in the NET Bible are not bad, the Treasury of Scripture Knowledge ones are free with most Bible software, but the best I’ve seen come with Bibles from the French Bible Society – why haven’t others copied them? Get a set of cross-references and follow them to see how richly biblical chapter five is but don’t get so caught up in the trees that you miss the forest!:

Revelation 5:11-14 11 Then I looked, and I heard the voice of many angels surrounding the throne and the living creatures and the elders; they numbered myriads of myriads and thousands of thousands, 12 singing with full voice, “Worthy is the Lamb that was slaughtered to receive power and wealth and wisdom and might and honor and glory and blessing!” 13 Then I heard every creature in heaven and on earth and under the earth and in the sea, and all that is in them, singing, “To the one seated on the throne and to the Lamb be blessing and honor and glory and might forever and ever!” 14 And the four living creatures said, “Amen!” And the elders fell down and worshiped.

Because only the “lamb that was slaughtered” is worthy, because only he has or could “Revelation 5:9 ransom God saints from every tribe and language and people and nation.