Humour in the Bible, book 15: Ezra 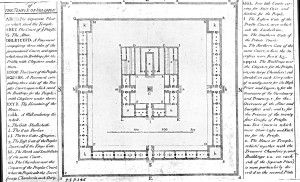 The chronology of ancient kingdoms amended: to which is prefix’d, a short chronicle from the first memory of things in Europe, to the conquest of Persia by Alexander the Great: with three plates of the temple of Solomon / by Sir Isaac Newton. Dublin. Image is of plate #1 (Image from Wikipedia)

Ezra is far from the funniest book in the Bible, or the easiest read. Yet even here there are hints and traces of that most human of phenomena, humour. In Ezra 3:12-13 (as often) one either has to laugh or cry. Throughout the book something funny is going on with language and translation (see e.g. Ezra 4:7, 18), but no one has yet explained satisfactorily what! The ever so tactful representation of Ezra’s lack of faith in Ezra 8:21-23 is often cited. And in the end, I cannot resist mentioning David’s candidate in Ezra 5-6 culminating in Ezra 6:8-13. Isn’t this punctilious obedience a surprise 😉

One Response to Humour in the Bible, book 15: Ezra