Genres of Poetry in Scripture

This podcast may benefit from a set of notes, either as an alternative to the audio/screencast or as a reminder (since has a high information content). It is also longer and less fun than most, so if you like miss it out unless later in the series you need to come back to it for the framework… The system suggested here is not intended to be completely scholarly and precise, far less exhaustive, rather it is meant to be simple and convenient, necessitating some approximations and simplifications. 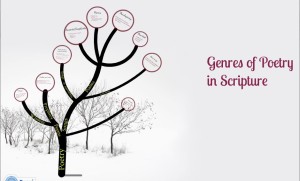 Classifying genres of anything is like drawing a tree

It can be helpful to distinguish poems and songs. Not so much because songs imply music, but because they suggest a more communal context (often celebratory or liturgical). Poem, similarly suggests a more reflective mode.

We will divide “songs” into three convenient groups: Psalms, Songs in narrative texts and Love Songs.

Songs addressed to or about God are mainly (but by no means exclusively) found in the book of Psalms. I’ll divide them here into three genres plus a grab-bag categoy for the other sorts (which each only have a few examples). Psalms of these genres are found also outside the book of psalms (e.g. in prophetic books, or embedded in narrative (( See below. ))

Psalms that focus on a sense that something is wrong have a fairly standard form (( We’ll talk about this more when we focus on the genre. A “form”, in this context, implies a more or less regular pattern of organisation and contents. Though the relative focus on  different elements may vary, and some may sometimes be missing. )) but some focus more on a statement of the wrong (laments), while others seem more determined to hold God responsible (complaints) while a third group recognise that the speaker is themself responsible for the wrongness (confessions).  (( For more on this see my chapter: Tim Bulkeley, “Does Jeremiah Confess, Lament, or Complain? Three Attitudes Towards Wrong.” In Spiritual Complaint: Theology and Practice of Lament, edited by Miriam J. Bier and Tim Bulkeley, 5–17. Eugene, OR: Pickwick, 2013. )) Because the world is such a mess such psalms are more common than the other genres.

Not old multi-verse  worship songs, but psalms that focus on praising God. They have a standard form: Call to praise (“Let us…”) or declaration of intent to praise (I will…”) linked by a conjunction (“for” or “because”) to the reasons for praise. (There is sometimes a conclusion also.)

Are psalms that focus on giving thanks to God for the good things he supplies and does. Their form has some typical components, but is less regular than the hymns. Elements of thanksgiving (like praise or lament etc.) may be found in psalms of other genres, they are a regular part of complaints (recognising the psalmists’ conviction that God will put things right).

This grab-bag for all the rest includes psalms classified according to their subject matter: wisdom psalms, royal psalms, Zion psalms, and other small groups with few examples each.

The book Song of Songs (Song of Solomon) is a collection of love songs, there is also a parody love song in Isaiah 5. (( See below on how prophets often deform genres for rhetorical purposes. ))

There are two main ways song is incorporated into (prose) narrative.

Following a prose account of the events we sometimes find a song about the same events e.g.: Ex 15 (following Ex 14);  Judges 5 (following Judges 4)…  these do not so much retell the story as celebrate it.

Singing in the story

We also find characters in the story singing songs, or fragments of song, (( Nb. the examples above could be considered this way, but are longer and less integrated into the telling, which I think suggests we may consider them somewhat differently for these purposes. ))

Are found in two main places, prophets and wisdom.

Prophets often adopt and use genres that we would expect to find elsewhere, e.g. they take dirges (often called laments, risking confusion with lament/complaint psalms) and sing them over living people or communities.  In doing this they “deform” the genre and give it new and different rhetorical force. Such variation and ingenuity adds spice to prophecy.

Biblical wisdom is most often expressed in poetry. Proverbs are short poetic sayings. The book of Proverbs also contains longer reflective poems (Proverbs 1-9) and the speeches in the drama of Job are fine poetry used to explore ideas, as in a different way does Ecclesiastes.

Blessings are expressed in poetry and fall outside the classification proposed so far (except that they are embedded in narrative).