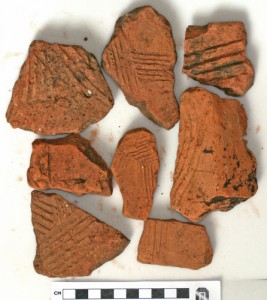 Fragments of a roman box flue (photo from Finds.org.uk)

Clay vessels were everywhere, plates, bowls, cups, storage, cooking… most of the everyday objects we make of glass or china, and many we make of plastic (or even metal) were clay pottery in the ancient world. Living back then you were deeply (and probably unconsciously) aware of just how fragile standard clay pots are. We live in a world of bone china and hardened glass. Even the average cheap dinnerset is so much tougher than an ancient pot, and the broken pieces of pottery were everywhere. Walking across the top of Tell Miqne – identified by the excavators as the Philistine city of Ekron – there were small fragments of broken pottery everywhere. Most of them from ancient times.

Pots broke very easily, hardly needing to be dropped, but apart from shattering into smaller pieces the material is very durable. So when Paul talks of treasure in clay jars the first thing to come to mind would be the fragility of the vessels. On the other hand fired clay is indeed very durable – it does not decay like wood or even iron (which rusts), unless it is broken, a clay vessel seals and preserves. Fine wines were kept in clay jars, the famous Dead Sea Scrolls were (many of them) held in clay jars to protect and preserve them. So Paul’s imagery here is vivid, simple and immediate.