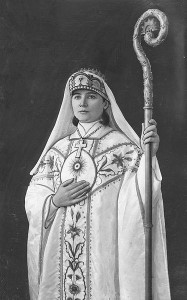 In this chapter Paul sets out some simple effective rules for Timothy about who are suitable people to be leaders in churches in particular he deals with “Bishops” and “Deacons”. Deacon means very different things today in Anglican and in Baptist churches, to name only two of the bewildering variety of leaders called “deacon” (all claiming to be biblical).  And Bishops are potentially even more divisive – if only because some of us don’t have them. Some translations mitigate the problem by using different words: NIV e.g. uses “overseer” but keeps “deacons” – there is obviously a modern theological agenda at work here between NRSV (heavier with more established denominations) with Bishop and Deacon and NIV (with more Baptists and the like) having Overseer and Deacon.

The third group mentioned here intensifies the issues! In v.11 is it “women” NRSV or “wives [of these male leaders implied] NIV? If women, is it women in general, or women leaders?

If we use the band aid approach to reading the Bible the problem is solved because Paul has said the leaders (of both sorts) must be “the husband of one wife” which means they must be male (unless you think Paul allowed lesbian marriages 😉 BUT the bandaid approach is dangerous – the Bible several times (using the band aid approach) says “there is no God” – so Christians are all called to be atheists!

If however we ask:
What were the main things Paul wanted Timothy to “get” from this passage?
Or more explicitly on this issue:
Is Paul determined that Timothy does not ordain women?
The answer is “obviously not”, if that had mattered to him he could have said: “All leaders must be men”. Or “All Bishops must be men”. Paul doesn’t say all leaders in church must me men because in Romans 16:1 he refers to Phoebe as a deacon. ((NIV translates diaconos “servant” here, but usually e.g. 1 Tim 3 it renders “deacon”)) Then in Rom 16:3 Priscilla is his “fellow worker in Christ Jesus” (in 1 Cor 16:19 he reverses the usual order to talk about Priscilla first and her husband Aquilla after instead of listing Aquilla (as the man) first. This suggests her importance to Paul as a church leader.  In Romans 16:7 Paul refers to a male apostle, Andronicus, and a female apostle, Junia, as “outstanding among the apostles” (NIV) Every Greek and Latin church Father until Giles of Rome (circa 1000 CE) acknowledged  that Junia was a woman.

So we need to ask the question: What did Paul want Timothy to “get” when he read this chapter?