What DID the text mean? 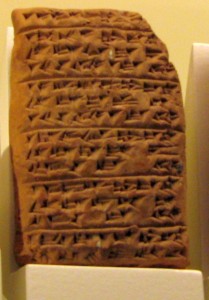 This clay tablet contains a letter from a local ruler in Canaan to Pharaoh (Original in Pergamon Museum, photo by Tim Bulkeley)

In our student exegesis assignments we ask them to state the intended meaning for the ancient hearers, ideally in one sentence, maybe two, never more than 50 words. They commonly have two problems. The first is being brief 😉 I have a Sansblogue post on writing tightly that helps address this issue. Their second problem is that they often tend to forget that the text ever had ancient hearers!

It’s a very complex one, according to Christians, since it involves the Holy Spirit communicating with people in all sorts of times and places, through human acts of communication at particular times and places. That’s what some hermeneuts ((If the art and science of understanding is hermeneutics, then the person who does it is presumably a hermeneut. )) call the double agency of Scripture. But doubly agented texts are not unusual – all messages (except written or electronic ones) have double agency.

Listen next to my podcast “Luke 15:1 – 15:32: Lost and Found” as the next in this series, before I tell you how I cheated, and what I missed out in that podcast!

Other podcasts on this topic already include:

3 Responses to What DID the text mean?