Signs of humour: especially in written texts across cultures 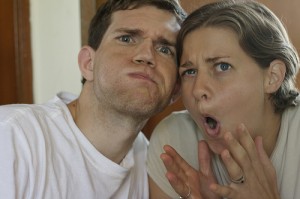 David Ker, in one of the posts that stimulated this series, poses the serious and significant question: given the cultural gulf that separates us from the authors of Scripture how can we be sure something we see as funny tickled ancient Hebrew funny bones?

Spotting humour is easier in speech than writing, and spotting humour is difficult across cultures. Anyone who has worked in a different culture knows how people’s “sense of humour” is to a considerable extent culturally determined.

There’s a whole academic discipline studying such questions, and several biblical scholars have put these studies to work. For we have such a cross-cultural written case everytime we think something in Scripture is funny!

In his paper F. Scott Spencer “Those Riotous – Yet Righteous – Foremothers of Jesus: Exploring Matthew’s Comic Genealogy.” In Are we amused?: humour about women in the biblical worlds, edited by Athalya Brenner, 7-30. Continuum, 2003, lists some attempts to approach such questions and arrives at a list of clues that humour is present. I have modified his list:

So, here’s the link to the audio: Signs of humour: especially in written texts across cultures

8 Responses to Signs of humour: especially in written texts across cultures