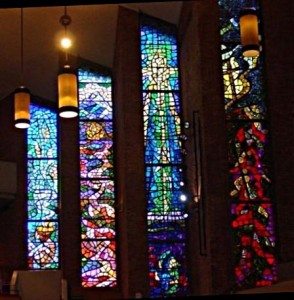 This chapter gives what it tells us is an eyewitness account of a Roman execution. Jesus, who has done no real wrong, except offend the religious leaders, and worry the politicians is subjested to the casual brutality of an imperial production-line death. Such a death, of an innocent man, is shocking. But Jesus was not merely a man, this was also the death of God, so as Jesus points out to the Roman govenor, Pilate, “You would have no power over me unless it had been given you” John 19:11 such a death overturns all expectations, gods are powerful, vengeful, gods are kindly and helpful… gods do not die so that humans may live!

CHRIST – DEATH
The fourth vertical window on the north side depicts the death of Christ. It is a dramatic, powerful, eerie and gruesome composition recording the most momentous event in history. Dark grays in the upper portion represent the actual darkness that invaded the cross where Christ died. The streams of red tell of the great suffering and sacrifice of our Savior. The gold around the cross and throughout the window symbolizes the presence of God in the death of Christ.