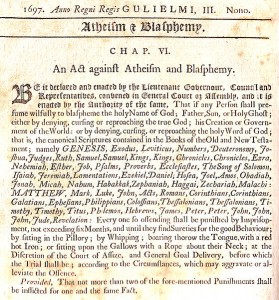 An Act against Atheism and Blasphemy, Massachusetts Bay Colony, 1697 (Wikimedia)

In the previous two podcasts in this series I’ve introduced “the Confessions of Jeremiah” and the first confession (11:18-12:6). Here we’ll look at this text from the point of view of how it portrays the characters of Jeremiah (in the book the speaker of the passage) and his God (whom he often addresses and on whose behalf he speaks to others).

I’ll suggest that this passage is far from a neat static cartoon of Jeremiah and God on one side and the Judeans (or the “Men of Anathoth”) on the other, goodies and baddies. Rather it shows a rich depth of character as Jeremiah learns to experience God more profoundly.