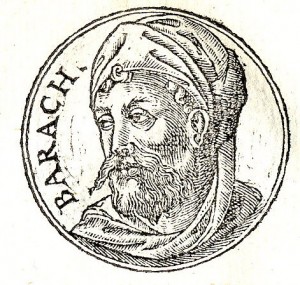 Barak the son of Abinoam from Kedesh in Naphtali, was a military general in the Book of Judges in the Bible. "Promptuarii Iconum Insigniorum" Published by Guillaume Rouille (1518?-1589) Wikimedia

Judges is one Bible book where it has been common to recognise humour. Ehud killing the fat and oppressive king Eglon in the toilet has been a popular example, though  I’ll pretty much leave the scatology to David and others who appreciate it 😉

I’d rather focus on gender.

In Judges relationships between men and women are either funny or horrible.

The story of Deborah (Judges 4) may provide examples, but the humour in the poem (Judges 5) is much clearer. It shows all nine of my diagnostic signs of humour. And develops some powerful (and this being Judges disturbing) gender bending humour. Though after the harsh laughs of the role reversals it is with a pleasant smile that we notice the delight Sisera’s womenfolk take in their imagined looted finery with “divers colours of needlework on both sides” (Judges 5:30) with its gender stereotyping 😉

2 Responses to Humour in the Bible Book 7 Judges: Gender Bending