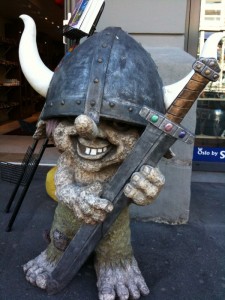 Not what either Zedekiah the prophet or a real Viking would wear, but it is funny (photo by dionhinchcliffe)

The strange, and strangely disturbing story of Micaiah ben Imlah in 2 Chronicles 18 which repeats very closely its source in 1 Kings 22 ((Which may mean this entry is cheating in terms of finding humour in every book of the (Hebrew) Bible, though it does seem to show that the Chronicles was not so humourless as to damage fine humour when he came across it. BTW if anyone has an example of humour in 1 Chronicles, I am still looking and would value your help. Tyler hinted at some killer comedy in Chronicles but so far no one has proposed a good example… )) it ticks all the boxes as a passage intended to be funny.

And when you read it, it is hilarious. From Jehoshaphat’s gentle resistance through Zedekiah with a “Viking” helmet, and Micaiah telling porkies after swearing the truth, only when caught claiming a Lying spirit from Yahweh tricked him, to Micaiah’s last laugh from prison, the tale is a riot 🙂

But what is its point?