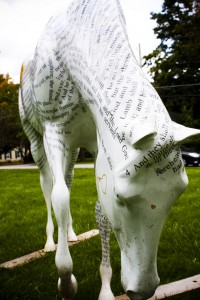 The book calls itself the apokalupsis of Jesus Christ – the revelation the disclosure of hidden things – so like parts of Daniel it will show us glimpses “behind the scenes” of the world letting us see a bit of what Christ is doing off stage. This means (paradoxically) that this book requires us to learn a bit about the setting and people for whom John is writing – it may be even more important for such a book than for one that tells the action on-stage 😉 John is a prisoner, “for the word of God and the testimony of Jesus”, in PATMOS, a small rocky island in the Aegean, about 15 miles West of Ephesus.

Futurist: Revelation talks about the future so interpreters often assume it is talking about our near future! We call these readings “futurist”. Because the book calls itself a revelation of hidden things, it is easy for clever interpreters to convince people it is a secret to be decoded. So Hal Lindsay in 1972 decoded Revelation and “proved” that the world would end in one generation from 1948 – when the modern state of Israel was founded – a generation he said was 30 years, so 1978 was the date. When it passed he decided that a generation is actually 100 years, even if he lived to be a hundred he’ll be safely dead by 2048!

But the Bible is not a code, its message is clear “perspicuous” God is not a trickster or puzzler who sets us difficult intellectual problems to solve.he earliest futurist readings (like Justin Martyr in 2nd century) saw the 1000 years ending (with the world in 1000or 1030AD) but that is long past so now.

Preterist: Another approach sees the book entirely set in our past – around John’s own time – this seems more true than the extreme futurist approach BUT some things in Revelation would not have made sense to John’s readers as being fulfilled in their lifetime. There IS still a future element…

Intertextual: John continually echoes rest of Bible especially the prophets, in doing this he creates resonances and so suggests that history repeats itself.

Literary/symbolic: John creates a “virtual world” where the real significance of events and things in the here and now can be seen a bit like CS Lewis’ Narnia stories.

Whatever approaches (and for sure we’ll need more than one for almost any passage from Revelation!) we need a strong awareness of John’s setting and the people to whom he was writing. So why not read a few pages, from a Bible with introductions to books or from an “Introduction to the New Testament” book before you read the E100 chapters?