One column from Oxyrhynchus papyrus XX, a papyrus roll (approximately 5×20 cm) from Wikimedia

As soon as Christian faith began to spread beyond its first (Jewish) homeland it became a faith based on community sustained by travel and letters. A bit just like blogs and FaceBook today, letters nourished community, and sustained arguments or brought them to peaceful conclusions. The combination of new(ish) technology and Roman roads and sea trade routes caused an explosion of letter writing. The newish technology was papyrus (not new since it was known since 3rd millennium BC but a rival technology, parchment (leather scraped to give a smoothe writing surface) in the 1stC BC & AD together with better trade (Empire) made writing materials more available. Previously many letters were written on clay tablets or ostraca (broken pieces of pottery).

Letters were usually dictated to a scribe, but perhaps with a bit written in the hand of the author, as a demonstration of authenticity (like 2 Thes 3:17 Philemon 19). Carried by a trusted intermediary, letters were read aloud to the recipients. Sometimes a group of bystanders joined in the writing – so both reading and writing were often communal activities.

Much like bloggers today seek to project a personality across a void, ancient letter writers sought an extension of relationship, reviving friendship, at a distance. Many phrases in Paul’s letters show he saw the epistle as a substitute for his own presence.

There was a standard form for letters: 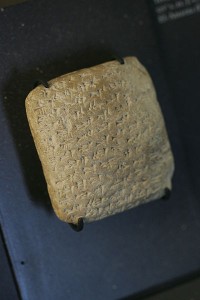 Letter of Biridiya, prince of Megiddo, to the king of Egypt from Wikimedia