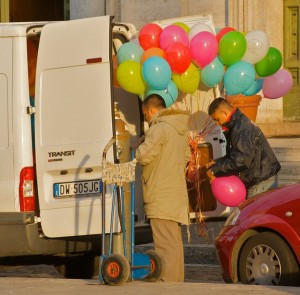 This picture by Ed Yourdon popped up in a search for "Peter bishop of Rome" it seemed to fit this reading, and I have used Ed's excellent photos before, so welcome another chance to say "Thanks!"

This epistle is a bit of a puzzle it presents itself as written by Peter, Jesus’ rough practical fisherman disciple, but it is written in smart literary Greek and the style seems to reflect Hellenistic rhetorical training. (As well as the sort of knowledge of Scripture we might expect from Peter!) Perhaps it was written by someone who owed a great debt to Peter or perhaps Peter had help from a ghost-writer – Silvanus (see 5:12) is a frequent candidate.

The Bible quotations and allusions pretty consistently seem to reflect the Greek (LXX) which also points away from Peter having selected the words of the letter. But the letter is most deeply concerned to discuss the Scriptural basis of Christian theology (remember Scripture means OT). As well as the Psalms and references from Isaiah that are common in the NT it also quotes Proverbs several times and Leviticus.

However the letter was composed, its solid Scriptural foundation, and polished style make it surprising that it is not better known among Christians, perhaps it is only read so little because Paul has such a dominant place, and because Peter deals less in controversy and more with the simple basics of faith!

Wow never mind who wrote it, and what writing it meant, just listen to the powerful language and theology!