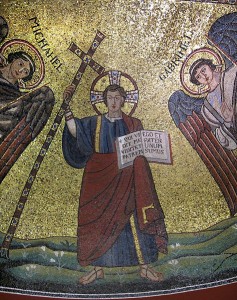 Colossians – like Ephesians and the Pastorals (1 & 2 Tim and Titus) is often thought to be by someone copying Paul but it’s ideas (and some wording) seem to have been used in Ephesians, which would make it very early if it is not not really by Paul. I cannot understand the excitement over debating back and forward whether Paul wrote it. It is in the Bible, it is addressed a very early church, and has messages that are important for us. What more matters?

Our reading starts with the introduction to the letter.  First the greeting (Col 1:1-3) then a thanksgiving for the Colossians faith, love and hope, then Paul and his colleagues pray for the Colossians to know God’s will and so lead lives pleasing to God, to be strengthened and prepared to endure, while giving thanks to the Father.

Then Col 1:14-23 presents solid doctrine about who Christ is and what he has done.

This reading really ought to have come earlier in this week! It contains the Intro to a letter and also an Intro to thinking Christianly.

In Col 1:13-14 the hearers of the letter are reminded that they have been redeemed from sin, the power of darkness (bought out of slavery) into the kingdom of the beloved son cf. Israel ransomed from slavery to Egypt/Pharaoh to become child of Yhwh.

He is the image of the invisible God,
the firstborn of all creation;

for in him all things in heaven and on earth were created,
things visible and invisible, whether thrones or dominions or rulers or powers-
– all things have been created through him and for him.

He himself is before all things,
and in him all things hold together.

He is the head of the body, the church;
he is the beginning, the firstborn from the dead,
so that he might come to have first place in everything.

Col 1:21-23 reminds them that this hymn describes their experience – estranged from God but now reconciled by Christ through his death, provided that they remain firm…