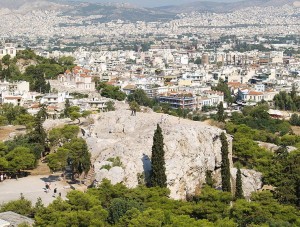 The rocky hill west of Acropolis rises 115 meters above the city. (Photo by Ken Russell Salvador)

These five chapters describe Paul’s second and third missionary journeys, amid many trips covering between them about a decade there are lots of exciting stories. The approach Paul took in Athens is of particular interest, it’s a very early example of Christianity not merely translating but contextualising – expressing the message not only in the words but also the culture of another people. Paul use elements of Athenian culture – even their “unknown god” – despitebeing “deeply distressed to see that the city was full of idols” Paul does not apply the knee jerk Jewish response (fun though it is) to idol worship. Rather he notices that his audience likes new ideas, and he plays on this tailoring his speech to philosophers. Then because after philosophy Greeks loved poetry he quotes a couple of their poets.

The other striking thing about this story, in its succession of different towns and cities, is the response. The preaching of Paul and the others elicits two strong and opposite reactions many convert and join the followers of Jesus but powerful people and leaders are more likely to seek to silence the message. This is strikingly different from churches in the West today. Our preaching is addressed most of the time to insiders, who are the rich and powerful (or at least the pretty comfortable). So churches in the West are shrinking (or at best hardly growing or growing slower than the population) and Christian preaching tends to use a Christian language and words others no longer understand. Or worse we talk about things that don’t interest them!

Paul talked about what interested his hearers, in ways they were familiar with, and the churches grew explosively
and mainly among the poor and exploited – because they knew they needed the sort of God Paul preaches!