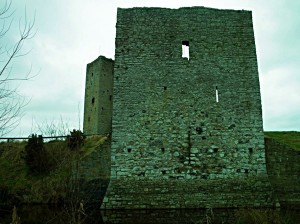 "Beyond the Pale" - Trim Castle, on the south bank of the Boyne, was an outpost to protect "the Pale" the Norman invaders' enclave around Dublin.(Photo by William Murphy)

In Matt 26 when Peter was supposed to be praying with Jesus he went to sleep, here a similar physical need interrupts his prayer, he’s hungry (in Peter’s retelling says he fell asleep here too 🙂 But God uses the two situations quite differently – here his hunger gives him a vision!

OK God’s message to Peter is quite clear, the behavioural rules that we think measure God’s favour don’t
the good news of God’s love is for everyone. But what about those food laws? This vision is not about food laws, but about the God who made them.

Those rules marked out a people. Those who keep these rules are part of this people…  But Jesus regularly broke the rules – and in breaking them healed. Peter and Paul do the same.

Reading Acts 10-11 with Acts 15  and especially Gal 2 poses all sorts of headaches for historians. However, one thing seems quite clear, despite this vision, and probably despite Peter’s triumph in Jerusalem, one day in Antioch he has a relapse 🙁 The good news is that Bible heroes even people like Peter, with his vision, his triumph in Jerusalem and everything can fail – just like me, and you!