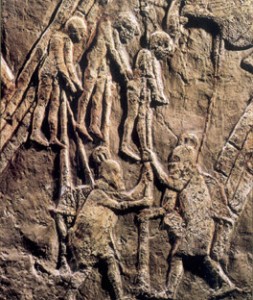 Today’s is a grim reading. But such brutality was not unusual in the Ancient Near East. The Assyrians, for example, when they captured the Judean city of Lachish after a siege in 701BC impaled the surviving leaders outside the city, and left a mass grave of 1,500 people (mainly women and children).

Despite what one might even see as gentle treatment of the city by the Babylonians in 586, the fall of Jesusalem marked Hebrew thought deeply because it was God’s city, their last toehold of political independence in the promised land and Yahweh’s holy temple that the Babylonians destroyed. In doing so they also destroyed many Hebrew’s faith in Yahweh, and thus shaped our Bibles. Many of the prophetic books either warn of the coming destruction, or seek to cope with the exile of the leaders and their resulting loss of faith in Yahweh.

Today’s reading therefore tells the core event that helped shape much of the Old Testament.